Musculoskeletal models are frequently used to predict muscles forces since in-vivo measurement is an invasive procedure. However, to obtain physiologically faithful estimation of muscle forces, accurate muscle geometry is required. In musculoskeletal models, muscles are typically modeled as a series of discrete massless fibers from origin to insertion points with via-points and/or a geometrical wrapping surface representing the underlying bone structure. This approach brings some drawbacks while modelling large muscles with multiple functional compartments such as the deltoid. Several researchers tried to add transversed constraints between fibers in order to maintain a muscle consistency [1]. Recently, we proposed a new wrapping approach, in which each muscle fiber wraps around one unique ellipsoid [2] . The objective of this study was to implement three geometrically different models of deltoid and compare compressive and shear components of predicted muscle forces.

A large-scale musculoskeletal shoulder model was previously developed using the Anybody Modelling System (Anybody Technology, Aalborg, DK). We simulated an arm elevation in the scapular plane for one subject (male, 75 kg) to predict deltoid muscle forces using the original (via-points) and two newly developed models: the 2D surface mesh model and the ellipsoid-fit model .

In the first original model, to avoid penetration of lines of action into bones, a spherical wrapping object was centered in the humeral head. Additionally, via-points, were rigidly fixed to the supplementary phantom segment to prevent uncontrolled sliding of muscle fibers on the humeral head.

In the mesh model, via-points were removed. Instead, each line of action contained 20 nodes connected in the lateral and transverse directions by elastic linear springs.

In the ellipsoid-fit model, instead of one wapping sphere, the set of elliptical wrapping objects were used. One unique ellipsoid was defined for each muscle fiber. 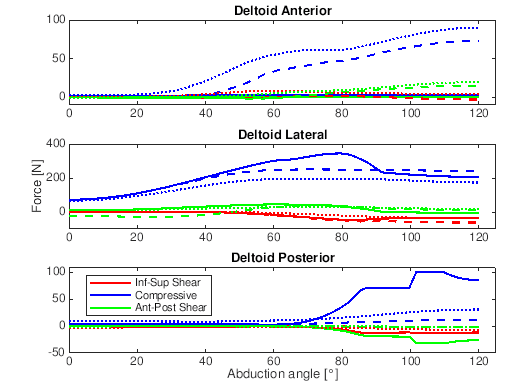 Figure 1: Three force components: compressive , anterior-posterior and superior-inferior predicted  by a) anterior, b) lateral and c) posterior deltoid during an abduction in the scapular plane.

The deltoid plays an important role in the glenohumeral joint stabilization.  The information about shear and compressive force components of deltoid muscle could be useful to study shoulder stability especially in pathological joints. It was previously shown that the stabilizing function of the deltoid muscle takes on more importance as the shoulder becomes unstable [3]. The musculoskeletal models could be an interesting avenue to discover more in this area. However, as this study shows, the geometrical representation of the deltoid influence significantly the prediction of muscle forces. We recommend a careful validation e.g. based on the moment arms obtained from medical images to ensure that the muscle geometry is correct hence to improve the realism of forces prediction.

With the ever increasing costs to the healthcare system in the treatment of debilitating
diseases (e.g. diabetes, Alzheimer, etc.) universal healthcare providers are extensively looking towards new cutting-edge biomedical sensing and monitoring instruments that would allow quicker and cheaper diagnostics before the onset of acute illness repercussions. Malaria represents one of the most vectorborne infectious disease in the world affecting over 200 million people with 400 thousand fatalities every year. Current methods to detect the presence of malaria parasites in the blood stream are often too costly and slow (microscope blood analysis or polymerase chain reaction tests by expert technicians) for most of the affected population. Furthermore if detected early, malaria can be treated with high success. Clearly, research and innovation in the detection technologies used towards the rapid and cost-effective malaria screening are necessary.

In this project, we propose to develop a novel, compact, low-cost and highly
sensitive biomedical fiber-optic sensor for the early malaria detection without the need of special
technical expertise to operate. Our sensing scheme will exploit the magnetic properties of the hemozoin compounds excreted by the parasite-infected blood cells.

Recent earthquakes in active seismic zones in Canada and worldwide indicated that the operational functional components (OFCs) attached to buildings are prone to severe seismic damage or collapse if they are not adequately designed. The damage or collapse of OFCs during earthquake events leads to fatalities, large financial loss and can also cause temporary loss of use of critical structures such as hospitals, schools, and airports.

National Building Code of Canada (NBCC) states formula to determine the seismic design force on OFCs. This formula considers the supporting structure elastic. However, based on the same Canadian code, designers have three options for the seismic design of reinforced concrete frames: 1) ductile, 2) moderately ductile, and 3) conventional constructed, which involve special values of force modification factors (Rd and Ro) and detailing provisions to ensure the required behavior.

This research aims to study analytically the effect of the ductility level of the supporting structures on the peak horizontal floor accelerations (PHFA), which represents the seismic demand on OFCs, corresponding to the loss of functionality performance level during an earthquake.

Machine learning models are impacting most of the tasks in our daily life, for instance, in marketing, lending for home loans, education and even in courts of law. However, machine learning models might be biases towards specific demographic groups due to, for instance, the biases that exist within the training data. For example, higher accuracy is found on white, male faces for facial recognition, and the prediction probability of recidivism tends to assign an incorrect high risk to a low risk African-American. These types of issues have recently been triggered by a large number of algorithms in the supervised setting. Also, very recently, the community started to investigate fairness constraints in unsupervised learning. The problem consists of embedding fairness constraints, which encourages clusters to have balanced demographic groups (eg, sex, gender, race, etc.), so to counteract any form of data-inherent bias. Our study investigates a general variational formulation of fair clustering, which can be used with a large class of clustering objectives. Unlike the existing methods, our formulation can impose any desired (target) demographic proportions within each cluster. Furthermore, it enables the trade-off between fairness and the objective clustering. K-means, prototype-based such as K-means, K-median and graph-based such as Normalized Cut. Interestingly, at each iteration, our general fair-clustering algorithm performs an independent update for each variable assignment, while guaranteeing convergence. Therefore, it can be easily distributed for large-scale data sets. Such scalability is important to explore different trade-off levels between fairness and clustering objectives. Unlike existing fairness-constrained spectral clustering, our formulation does not need storing an affinity matrix and computing its eigenvalue decomposition. We demonstrate the flexibility and scalability of our algorithms with a comprehensive set of synthetic and real world data sets, many of which are much larger than those used in recent fair-clustering methods.

A 2D finite element (FE) model for orthogonal machining of 6061-T6 aluminum alloy is developed and experimentally validated to study the interactions between the geometry of a turning tool including cutting edge radius and rake angle and the machining parameters such as cutting speed and feedrate on machining forces and cutting temperature.

The area of industry and safety regulation for job sites in Canada is under the regulation of the Canadian Centre for Occupational Health and Safety (CCOHS). According to CCOHS (Government of Canada, 2017a), common workplace hazards are defined as Confined spaces, Indoor Air Quality, Lasers, Scent, Temperature, Ventilation, Violence, Weather, and Working Alone.

As an example, in regards to the category ‘Temperature’, CCOHS defines the exposure limits for heat stress as intended to minimize the heat-related impact for Canadian workplaces. The following considerations are taken to cover the safety of workplaces related to temperature: Hot Environments - Control Measures, Maximum Temperature Limit for Working, and Thermal Comfort for Office Work.

The problem is the lack of accurate measurement techniques for safety climate and culture in operations management according to the study ‘Measuring Safety Climate’ (Fan, Lo, Ching, & Kan, 2014). This problem is often observed in industries such as manufacturing, construction, and retail trade. According to the 2015 Injury Statistics Across Canada (“AWCBC / ACATC : Statistics,” n.d.), most of the claims reported by occupation are trade, transport and equipment operators. The injury type most common is traumatic, and the sources of injury most common are structures, surfaces, and people. Falling from structures and overexposure to high temperatures is also part of the top offenders from nature occupational hazards.

Occupational safety in major industries has been reported as a growing research topic. From (Flin, Mearns, O’Connor, & Bryden, 2000) it is highlighted the importance of the awareness that organizational, managerial and human factors are the main cause of accidents instead of technical failures in the industry operations in high-reliability industries such as oil, construction, hospitals, etc. According to the Canadian Environmental Protection Act (Canada & Canada, 2013), climate change may worsen existing indoor environmental problems and introduce new problems. Weather changes may jeopardize and impact the safety of hazardous workplaces more rapidly. The aim of the project is to provide a tool to enhance the assessment of workplaces and its hazard conditions from the worker’s perspective by introducing a wearable WSN and introduce a tool of applied IoT into building management systems (BMS). The tool consists of an IoT platform that reports in quasi-real-time sensor data from the WSN in the workplace. A company can have several locations; therefore the size of the network is in proportion to the number of elements (sensors nodes) in the WSN per job location or area of coverage (indoor and outdoor).  Here, the tool is IoT based due to IoT is capable of managing large scale of objects at the field level within a targeted wireless access area.  Additionally, the application of the IoT based platform can manage large volumes of streaming data in quasi-real-time, apply algorithms of machine learning (ML) and create preventive actions ordered in the down-link of the IoT network.

In this work, we investigate the stable propagation of donated shaped beams aka optical vortices (ie orbital angular momentum (OAM) and cylindrical vector beams (CVB)) in newly designed annular photonic crystal fiber core (AC-PCF). The vortex beams are created in free-space via an S-plat (ie radial polarization converter) and launched in AC-PCF using an objective microscope. The fiber optical characterization includes the output mode of identification and purity measured after propagation through the fiber. Fiber optics is a polarization analyzer for CVB, and through observation of an interferogram for OAM beam. Our results demonstrate that these vortex beams remain stable in the AC-PCF. Moreover, the OAM beam can maintain high purity ˃ 18 dB (with maximum purity of 26. 13 dB) within a range of 805 to 845 nm. These results indicate that the design and testing of multiplexing, optical sensing and optical trapping / imaging applications.

Soil liquefaction is the phenomenon by which water-saturated soil temporarily loses its strength due to dynamical loadings such as in earthquakes. It can have drastic consequences such as collapse of buildings, destruction of dams, and retaining structures. Liquefaction is usually studied by simplifying soil grains as spherical particles. However, this simplification fails in general to provide accurate predictions of the behavior of actual soil grains, mainly due to an incorrect evaluation of contact forces. Therefore, it is proposed to use ellipsoids as a more realistic representation of soil grains. The discrete element method is used in the simulation of dense packing processes for ellipsoidal particles. The objective of this project is therefore assembling samples of grains which is the first step in the liquefaction simulation. Results of this project will be presented and compared with existing experimental data to demonstrate its accuracy and efficiency.